On our return from holidays, when it’s our birthday, or if we’re leaving,….. any other occasion, we are required to bring in tasty treats to work for everyone else. From holidays, generally the idea is to bring in things from the holiday destination, however, sometimes the baggage allowance means that this just isn’t all that much! To supplement the sweeties, I decided to make some things traditional, or representative of where we have been.

Part of our holiday was a trip up to Whistler, BC, for a long weekend of skiing. On the drive up, we drove past a place called Nanaimo, famous for being lovely…………………… and also for Nanaimo bars:

Nanaimo Bars Recipe – taken from The Boy who Bakes by Edd Kimber, or the official recipe is available from the Nanaimo, BC website (also a map to do a tour of Nanaimo by Nanaimo bar eating!)

85g butter (NB. I had to use an extra approximately 30g of butter, as otherwise the mixture just looked like crumbs!)

Press a piece of foil into the base and up the sides of a 23 x 33cm baking pan and set aside. (NB. my pan was slightly smaller than this)

Melt the butter in a medium pan over medium heat. Remove from the heat and whisk in the sugar and cocoa powder, then gradually beat in the eggs. Put back on the heat and cook, whisking constantly, until the mixture thickens, about 1 minute. Remove fromt he heat and stir in the vanilla, coconut, biscuit crumbs and walnuts.

Press this mixture evenly into the prepared pan….

(Mr M, ever the engineer, uses the potato masher off task to ensure a evenly flattened layer) Make sure to press the mixture in firmly so that it isn’t too crumbly when cut.

Chill until firm, about 1 hour.

Beat the butter using an electric mixer until light and fluffy, then gradually beat in the icing sugar until smooth (NB. as mentioned, I had to add more butter as it wouldn’t become smooth, just dry crumbs!). Add the custard powder and cream, and beat slowly until combined, then beat on high until light and fluffy. Spread in an even layer across the chilled base, then chill for a further 30 minutes. 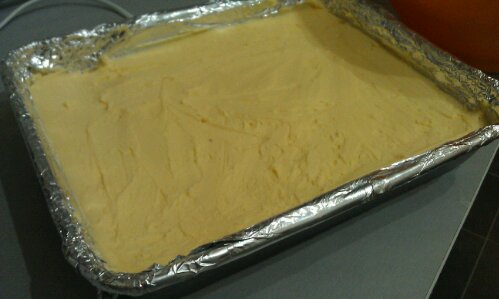 Put the cream into a pan, and bring just to the boil, then pour over the chocolate. Leave to stand for 2 minutes before gently stirring together until smooth. 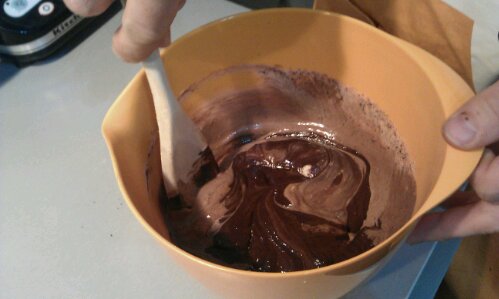 Add the butter, and again stir until smooth, then pour over the custard layer and spread evenly. 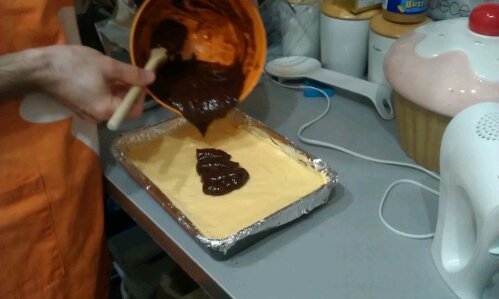 To serve, use a sharp knife and cut into squares (Edd’s tip is to run the knife under hot water, then wipe dry for ease of cutting)

No actual baking involved, merely some melting. I don’t like nuts, so was tempted to leave them out, but to be true to the recipe, I thought I had better leave them in. They taste nice, the butter in the top layer seems to have come out of it a bit, this is possibly that it wasn’t quite combined properly before it was spread over the top….. Or perhaps it will melt into it a bit when served at room temperature.

← What to do with 10 egg whites? Let’s have our fourth attempt at Macarons!
Peanut Butter/ Peanut Butter Cup Cookies. →