Or that’s what they say.

As it’s my big 30 this year, it seemed like an ideal occasion to have a family get together. The location for this get together is my cousin’s place, the most relaxing place ever.

Among it’s many fantastic qualities, it has acres of woodland, a large trampoline, and a permanent campfire where we cook the sausages, keep warm, and sometimes sing songs badly!

Around the campfire area they have seating made from old scaffolding planks on stumps of wood, nice to have….. uncomfortable after a little while. So, I decided I would make them some cushions as a little gift to say thank you for having us to stay!

I used just the regular 50x50cm inners from IKEA as my template, and bought some hopsack canvas to make the cushion backs, as they will be used outdoors and so I wanted them to be a little more robust. For each, I cut two pieces of canvas, one 50x30cm, and another 50x25cm finishing all the edges with the overlocker, then overlapping the two by 5cm to give an overall size of 50x5cm. I then made two buttonholes in each top piece, and attached buttons to the bottom piece:

For the tops of the cushions, I used fabrics from my stash, some of which I was given by my cousin’s Mother-in-Law when she downsized to a smaller place, and that his wife had had around her growing up. I thought it would be nice to use some of these so that they could still have them around. I cut 50x50cm pieces of each, along with another 50x50cm piece of calico so that I could double layer them and it would be more robust, as some of the fabrics, in particular the indian batik and older fabric pieces were quite thin. These were overlocked together so that they were treated then as one piece of fabric. 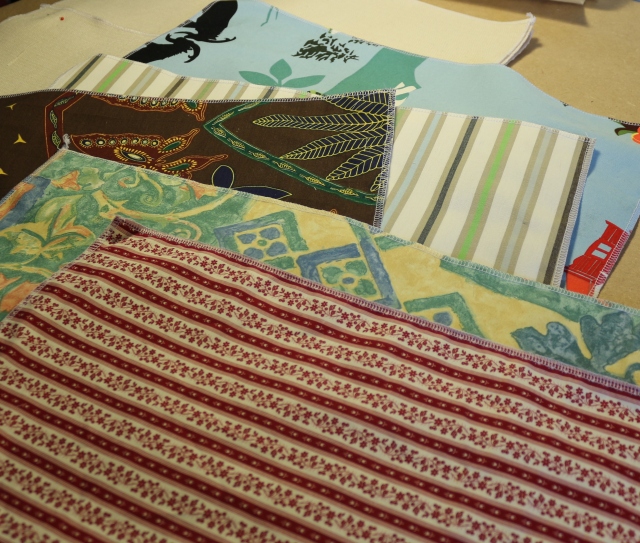 Then they were finished off, sewn right sides together, turned right way round, pressed into shape….. Cushion covers done!

In the end I made ten in total, in all different fabrics. A nice couple of bundles of squashiness!

They were put to good use by Mr M while snoozing on the grass: 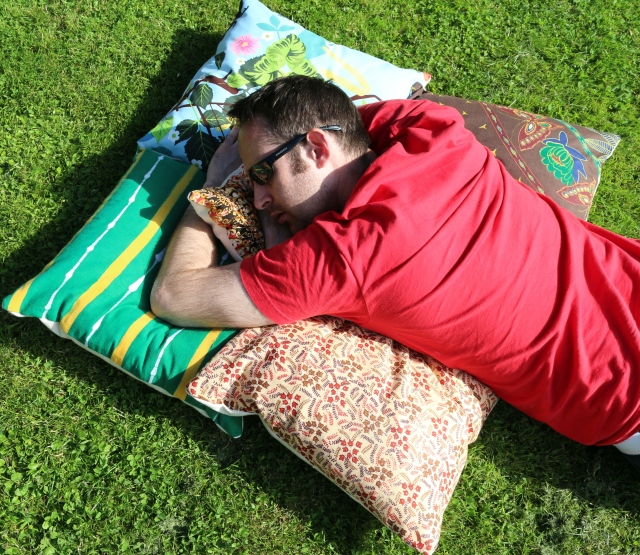 …and I also utilised multiple cushions while lounging by the campfire:

I also did finally get around to making a few more knitted breasts so I could give them to Z: 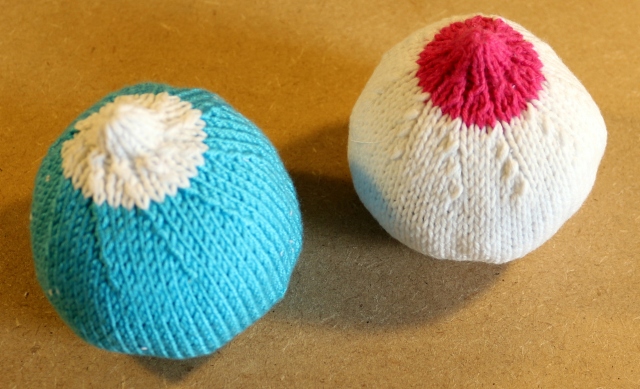 I call them Smurf Boob (or snow-capped peak) and Pasty English.