So… Happy Thanksgiving! Now I live over here I guess I need to embrace these things, We’re planning a Facetime date watching the parade with our friend Ashlei, and I made some croissants! It’s the simple Edd Kimber version of Croissant dough like I used for the Cronuts, and I made them for the first time a few weeks ago. This time around I included some marzipan and chocolate in the centre of the rolls, and actually had a pastry brush to apply the egg wash! Say hello to little Squid!

Anyhow, shameful as it is to confess, a couple of weeks ago I bought a Spaghetti Squash from the supermarket. I thought “oooh! Spaghetti squash!” They are a bit of a novelty item to me, as they are rare and few and far between in the UK, and certainly not for sale in the regular supermarket! It has however, since then sat unloved and unused, in the cupboard. Poor squash. So I figured I had better do something with it.

In my first, and last, attempt at cooking with spaghetti squash, I roasted it before combining it with other ingredients, and it took FOREVER, and still was mostly uncooked and hard to separate out the noodles! This time around, I took the easy option and used the microwave.

EASY AS PIE! Or, in fact, easier, other than the microwave in our rented place is miniscule, and my squash was large, so I ended up having to quarter it to fit it in. So, cut in half (or quarters), scoop out the insides, then place face down in a microwaveable dish with 1/2 cup of water, and cover in cling film. Microwave on full for 7-10 minutes until cooked, allow to cool slightly, then scoop out the noodles!

Seriously. SO much easier.

In the spirit of Thanksgiving, this is a little something you can whip up with any old leftover vegetables, I used some of the squash, and pre-cooked some carrots to go with them. The amounts for the veggies are a bit loose and neither here nor there, so feel free to stick any old amount of anything in! And I refer to them as “biscuits”, because I don’t know that I’ll ever get used to them being biscuits. I am British, and biscuits are those hard things you dunk in tea.

Leftover Vegetable and Cheesy “Biscuits” – inspired by this recipe by Joy the Baker.

Pre-cooked spaghetti squash – I used about a third of the noodles that I got from cooking mine, as it was quite large.

Pre-cooked carrots – I used about 3, sliced.

3/4 cup cold buttermilk – for a substitute as I still don’t keep this stuff in the house, I used 1 cup of milk and 1 3/4 tsp cream of tartar to make some fake buttermilk

Create a small well in the center of the dry ingredients and add the buttermilk.  Combine to make a loose dough.  Dump dough out onto a lightly floured work surface.  Knead dough about 10 times, bringing it together into a roll.  Wrap dough in plastic wrap and refrigerate.

Assemble the vegetables in an ovenproof dish.

Remove the roll of biscuit dough from the fridge, and slice into rounds. Place on top of the vegetables, brush with buttermilk, and place in the oven. Bake for 15-20 minutes until the biscuits are golden and baked all the way through. 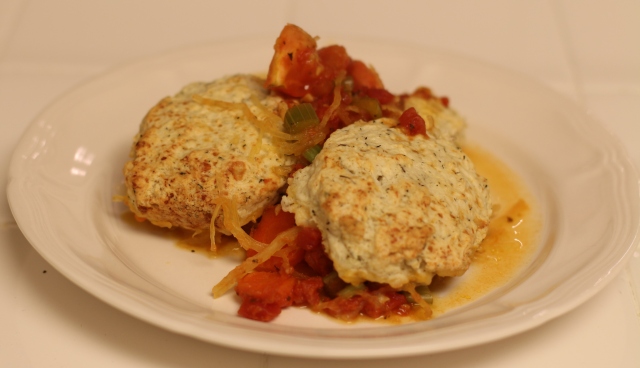 This will feed about 6 people (probably), but you can modify the amounts according to what you have. Any leftover biscuit dough can be frozen and used later. Pah! Leftover dough, as if!

Now I’m off to watch the parade!