I did not quit my job to be a unemployed slacker, there was a reason, and the reason is my return to school so I can re-qualify as a laboratory scientist in California!

Yeah! I am very excited, but that is of course partly because I am a super nerd who loves school, and also because I am finally getting on with it and getting it done, so that I can be back to what I love – poking things with sticks.

Back to school time does of course involve stocking up on stationery, the purchase of a new schoolbag (my old rucksack was starting to fall apart and smell), and…… well I just kind of felt the urge to stitch some new clothes!

This is also due to my habit of seeing a cute patterned fabric and deciding I was going to make a top out of it…. and then leaving it in a pile in the corner and not getting round to it for ages… I mean just look at all the adorable prints I hadn’t been able to resist buying a yard or so of:

The top two came from Joann Fabrics way back in May, when my friends came to visit, and the other four are from Fabric Depot in Portland, from the beginning of July. Actually come to think of it, perhaps they haven’t been sat around for all that long… it just seems that way because they are, as previously mentioned, adorable.

Anyhow, I made them all into Scout tees, using the Grainline Studio pattern, which I have already made at least five times, so the pattern has the same adaptation as usual. 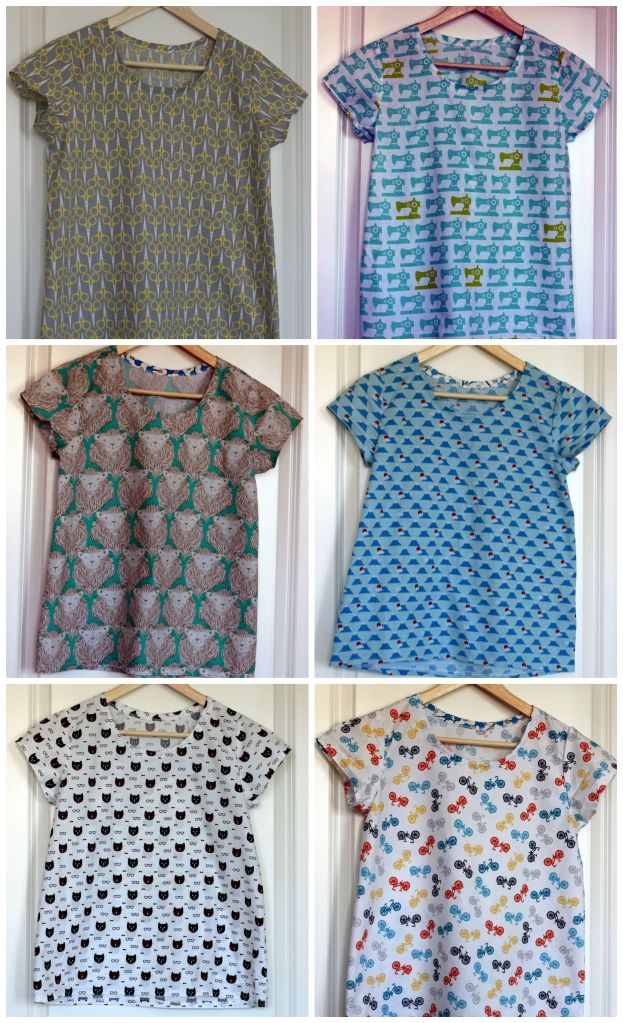 The only difference in these cases are that… I was super lazy and used my overlocker for all sorts of little time savings along the way:

The binding around the neck, I just overlocked one edge of a bias strip, sewed it in place and then stitched it down, instead of pressing over the edge…. blah blah blah. For the hems on the base of the shirt and sleeves, I just overlocked the raw edge, pressed it up, and then stitched it down. All the raw edges of the seams were also finished using the overlocker,

Each one only took an hour or so, and now the little pile is no longer staring at me reproachfully from the corner of the room.