So I made these Chelsea Buns a few weeks ago….

They were good, but I think my technique needed a little work, I didn’t prove them long enough before baking, and they didn’t quite increase in size as much as I would have liked. – Note this may also be solved with the sugar issue (see below)

Mr Hollywood would not have been impressed.

Only one thing for it.

Let’s do it again!

However, I had a little idea the other day… and decided to mix it up a bit.

I present…. Chocolate and Caramel Chelsea Buns! (Yeah… I’m kinda big on caramel at the moment…) 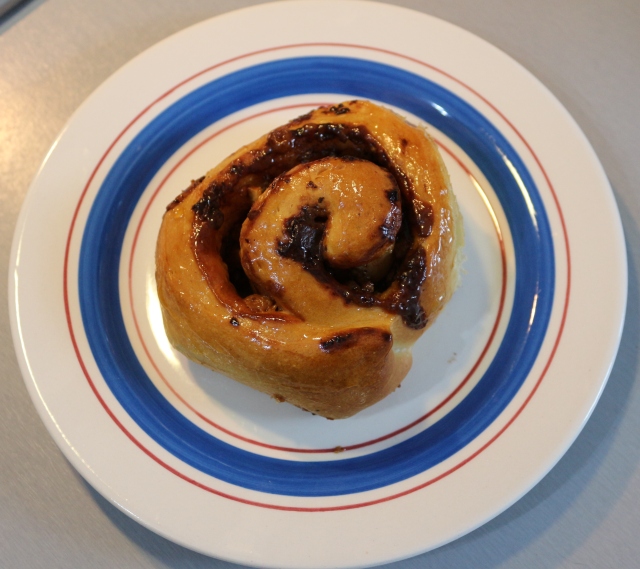 40g/1½oz unsalted butter, plus extra for greasing the tin

*Note: one of the commenters on my chelsea bun post (Thanks Richard Juniper!) pointed out to me that in the masterclass episode, Paul actually adds 40g of caster sugar to the dough, which isn’t stated in the recipe either in the book or online. Naughty naughty! This may well be an error in the printed recipe, as I had an issue with another recipe (the doughnuts and their frying temperature), which when I then watched the masterclass did seem to be different to what Paul actually did!

Place the flour, sugar, and salt into a large mixing bowl and stir until thoroughly combined. Make a well in the centre of the flour and pour in the yeast.

Warm the milk and butter in a small saucepan until the butter is melted and the mixture is lukewarm. Pour into the flour mixture, add the egg and stir thoroughly until the contents of the bowl come together as a soft dough.

Tip the dough onto a lightly floured work surface and knead well for five minutes, until the dough is smooth and elastic.

Place the dough into an oiled bowl and leave to rise, covered with a damp tea towel, for one hour or until doubled in size.

Once it has doubled in size, tip the dough out onto a lightly floured work surface. Roll out into a rectangle about 30x20cm/12x8in.

Using about half of the caramel (I recommend eating the rest with a spoon), smooth a thin layer all over the surface of the dough. Evenly sprinkle the chocolate and fudge chunks over the surface.

Grease a deep roasting tin or baking tray thoroughly with butter or oil.

Place the buns, cut side up, into the greased baking tray leaving about 1cm/½in of space between each one.

You want them to be close enough so that when they rise further and then bake, they will bake with their sides touching. They can then be pulled apart and you get a lovely soft edge.

Leave to rise for about 30 minutes in a warm place. (note: this time around, I left the tin, covered in clingfilm, on top of a radiator, and it seemed t work better)

When the buns are ready, put them in the oven and bake for 20-25 minutes until golden-brown. Check after 15 minutes or so and cover the buns with foil if they are getting too brown.

Remove the buns from the oven and let them cool slightly before transferring them from the tin to a cooling rack.

Melt the jam in a small saucepan with a splash of water until smooth. Brush the jam over the buns to glaze and allow to cool.

I suspect I may eat at least 5 of them before Mr M gets home. Definitely better risen and baked this time!