Eric Carle, for those with limited artistic skill.

(I am just going to gloss over the long blogging absence, I have been making things, but they haven’t been exciting things and I had kind of lost my mojo)

We all know I like to make things, but I don’t class myself as being particularly artistically skilled, and was way out of practice at making/decorating cakes by the time LO’s birthday came around. Where there is a will there is a way however, and I decided to decorate a cake with Brown Bear from the Eric Carle book, as we read it to her often (hence it’s bedraggled appearance) and I hoped it wouldn’t be too difficult!

If anyone else is interested, I began by tracing the main components of the bear (it is nicely divided up into sections!)

(I wanted the head of the bear to sit on top of the body, which is why I continued on the shape of the front part of the bear underneath the head.)

I then played around with brown, orange, and yellow colours in order to try to get the look I wanted for the icing. The back part of the bear’s body is a more orangey warm brown for example, so I added in orange to the base colour, then using a warm brown and not entirely combining it, so that it was streaky in lines, then applying the same technique for the other parts, such as the dark brown ears were dark brown on a brown base etc. To finish it off I added a few more streaks with a brush:

This went on top of a carrot cake with cream cheese frosting and was gobbled up by the adults present! 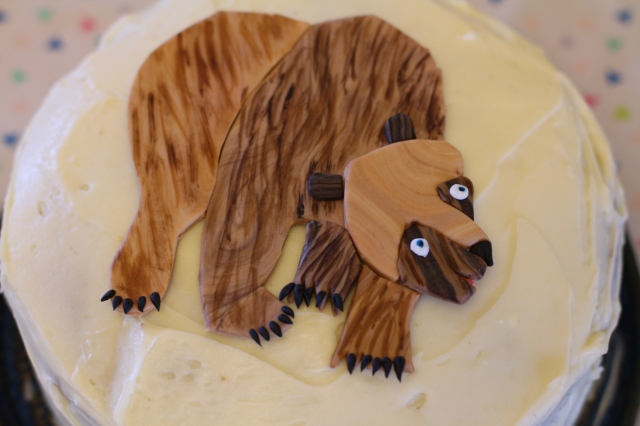 I made Evelyn a smash cake (this one), as a nod to her American-ness, but she couldn’t help her inner Britishness and ended up eating it with a fork! Hahah!

← I made something!
Pete the Cat Cake →