This year Mr M and I celebrate our fifth wedding anniversary.

Time flies when you’re having fun it seems, and for year 5 the theme of gifts is Wood.

A while back I saw a pin on pinterest for a sign made out of an old pallet (you can find plenty of examples with a quick internet search so I won’t bother to link a specific post), and I decided to have a go at making one as an anniversary gift. As we have the occasional delivery via pallet at work, I knew I could get hold of one pretty easily.

The ideal pallet did however present itself 3 days before we went on holiday in March, which was a little early considering I would have to hide it, and the whole making process from Mr M!

But hey ho. You’ve got to seize these things when they come along! It was ideal for my wishes because the top part was made up of pieces of wood that didn’t have gaps between them, unlike the ones that I would have to fully dismantle and reattach together next to each other, and it was in pretty good condition. This meant all I had to do was remove the top part from the base, leaving the connecting bits of wood intact, then trim to size and clean it up a little.

The first part, dismantling the pallet, took place at work. I felt very suspicious indeed wandering around with a crowbar and a claw hammer in my backpack…. but my friend Kat and I managed to pry the top part from the base without too much trouble:

First part was then done.

More troublesome however, was transporting it home. This thing was quite heavy, and measured 119cm by 100cm, so I had to make up a little white lie as to why I needed to borrow Mr M’s car and take it to work…… My poor Mini just wasn’t going to be up to the job.

Once I had it home, it was then a case of cutting it to the size I wanted. (this part actually didn’t happen for quite some time, as we went away on holiday, then I needed Mr M to not be about, and for it not to be raining…..)

My plan was to hang it above our bed (with some very sturdy screw/bolt/fixing combo), in the place where our wedding sampler was (as that was quite small for that space anyway).

I measured the gap, 155x100cm, then measured up all the aspects of the pallet to decide what size to make it:

Each piece of wood across the top was  9x100cm, and there were 10 pieces. The edges of the pallet were a bit damaged, so I decided to trim a little bit off each side, and remove some of the pieces.

In order to cut it to size, I removed the pieces of wood that held the top pieces together at each side:

(trusty crowbar and claw hammer coming in useful once more)

Then used some fresh pieces of wood to rejoin the edges together to stabilise them, and used a jigsaw to cut it down to size (using the power tools unattended!): 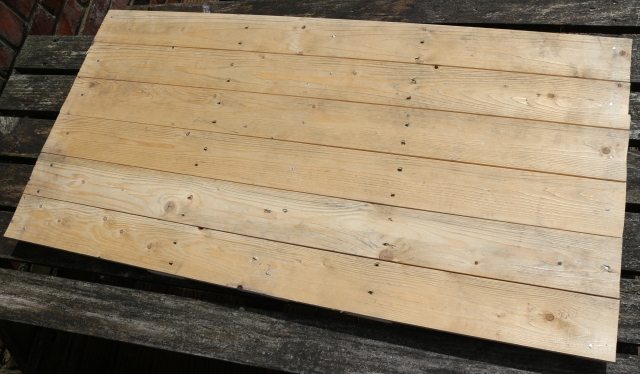 As you can see, it’s a little grubby looking, and has faded areas in parts. I wanted to keep it reasonably rustic looking, but even it out a bit more, so used some sandpaper to rub the surface back. Evening it out, but also exposing a little more of the grain:

I also smoothed over the edges on each side, so it was easier to handle, and then it was ready! 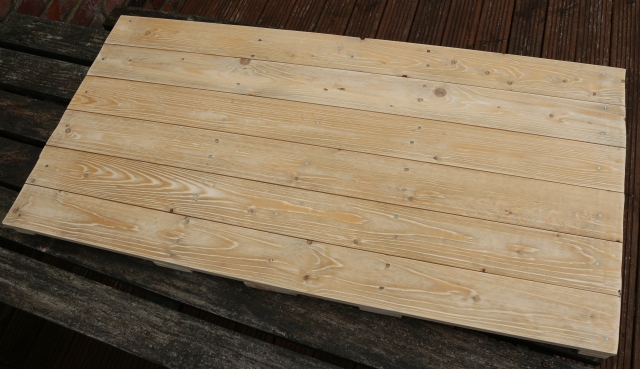 Still not perfect (but then if you want complete uniformity you nay as well buy brand new wood!) It is however a little more uniform, and I love the effect of the exposed grain.

The next part was a little more difficult, as I knew what I wanted to put on it, but had to try to decide on a font, size, etc…. for the stencil (no way was I going to attempt to freehand it!)

Our first dance song at our wedding was Louis Armstrong’s “We have all the time in the World”, so I decided that I wanted to put on some of the lyrics from that on to the sign.

The full stops indicating the way the lyrics work in the song of course, I wasn’t going to get too hung up on punctuation, but thought it was important that it would appear as it does in the song.

Appropriate lyrics for an anniversary gift too I thought!

The more tricky part was picking a font. It took me ages to decide. I wanted a plain but bold font for the main writing, then a curly, fancier, font for the Love. I then discovered dafont.com. Then it took even longer!

I finally settled on using Old Letterpress Type and Unchanged Thoughts, so did a little mock up approximation of how I wanted it to appear:

I decided to use the same colours as in our room, an off white for the main lyrics (the black letters), and the green colour for Love.

So I printed out the image in the appropriate size, then made it into a template, flipped it, spray mounted the back and applied it to the surface of the wood:

Then it was just the nervewracking task of applying the paint to the stencilled surface, and of course the moment of truth as I lifted it off…. It’s a little rough around the edges as the paint bled a little underneath the stencil:

But I used my craft knife to tidy it up a bit around the edges….. and it was done!

The green colour doesn’t show up massively well, but I still like it. And even managed to keep it hidden from Mr M! I let it dry, then wrapped it up in some fleecey fabric that I had lying around to protect it, and wrapped it up so it was hidden, decorating it with cut out letters and a leftover heart from my coffee dough experiment:

Five years of wedded bliss. And many more to come!

Note: Mr M’s response to said gift was to leak a little bit of moisture around the eyes. I think that meant he liked it. 🙂

Tags: 5 year wedding anniversary, Louis Armstrong, Pallet DIY, We have all the time in the World, Wooden Pallet Sign