A little while ago, I was flicking through one of my (ever increasing collection of) cookbooks, and writing down a ‘to bake’ list of everything I liked the look of…. As the book was: 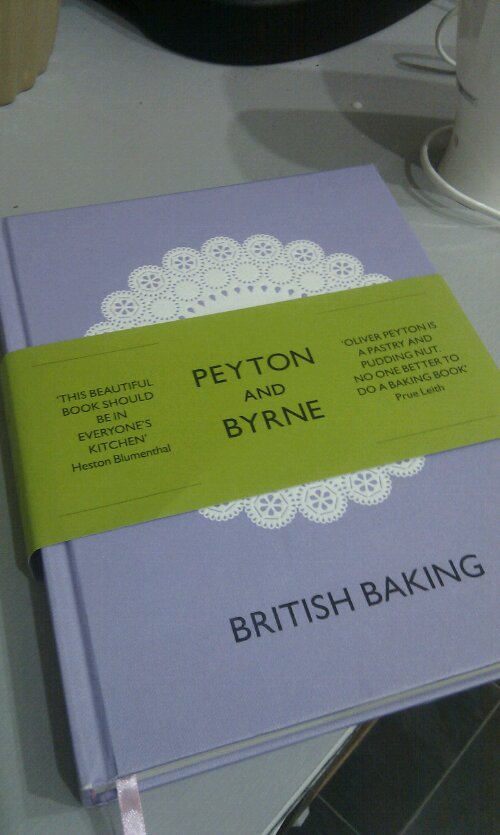 The very beautiful British Baking by Peyton and Byrne (Oliver Peyton), the list was extensive:

The first things off the list were Eve’s Pudding (not anything special, but ok), and Marshmallow Teacakes, which were very yummy indeed. This was another recipe on the list, and after a very hectic week at work (2 nights on call, and one 12 hour late shift), some therapeutic baking was needed…..

– taken from British Baking by Peyton and Byrne

Line the base and sides of a 900g loaf tin with butter and baking paper. (Currently the only loaf tin I own is a silicon one, so I skipped this part) Preheat the oven to 180°C/ 350°F/ Gas Mark 4.

Sift together the flour, bicarbonate of soda, and salt (I confess, I am not a sifter…. I am a whisker, it combines the ingredients nicely, and thus far hasn’t really failed me) into a bowl, and set aside.

Separate a third of the mixture into a clean bowl. Whisk together the cocoa powder with the boiling water and add to this portion of the batter, folding it through with a spatula.

Spoon dollops of batter into the prepared tin, alternating spoonfuls of the cocoa-flavoured batter with the plain batter to form a chequerboard-like pattern. Drag a knife through the batter in a swirling motion to create a marbled effect. 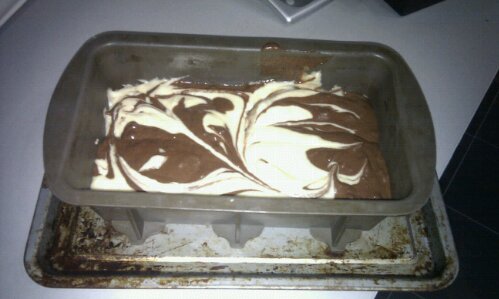 Bake the cake for 45-55 minutes until it springs back to the touch and a skewer inserted into the centre comes out clean. Remove from the oven and allow to cool for 10-15 minutes before turning it out onto a wire rack to cool. 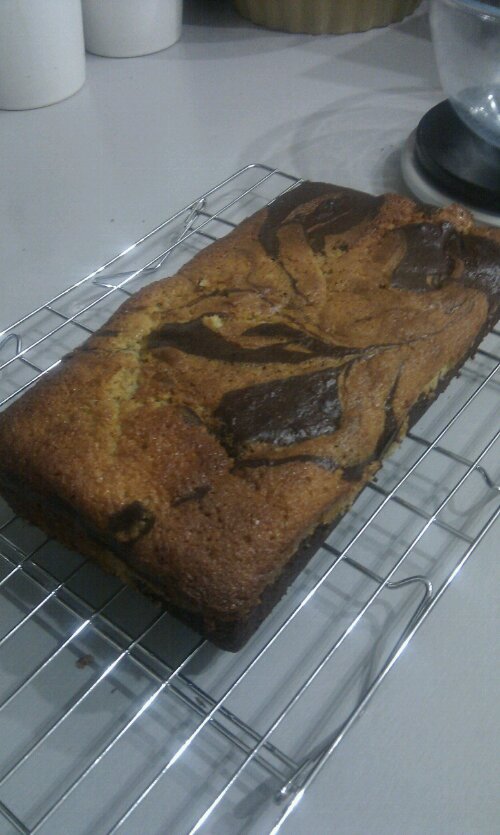 While the cake is cooling, prepare the icing by melting the chocolate in a heatproof bowl over a pan of simmering water, then remove from the heat and allow to cool.

In a separate bowl, whisk together the icing sugar and milk. Add the cooled, melted white chocolate and whisk until smooth and uniform. Use the icing straight away so that it doesn’t form a skin, pouring over tge cake, allowing it to drip over the sides. 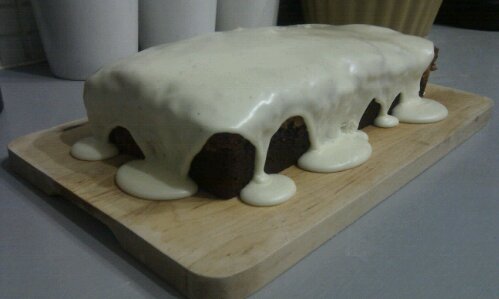 The cake will keep in an airtight container for up to a week (as if it will last that long!)

The cake is really moist and yummy, I’m not a big fan of white chocolate, sometimes it’s too sweet…. but in this it works. NOM.