We had some cooking apples festering in the fruit bowl, abandoned, forsaken, and of course inedible unless something is done with them. Soon to be off on holiday, they really needed something doing with them… so what else would I do with leftover apples? Make a cake!

This is my favourite apple cake recipe, I usually make the modification of substituting ginger for cinnamon, as one of my friends is not so keen on cinnamon.

Poor cinnamon, such a disliked spice.

2 medium cooking apples (when peeled and chopped, the weight of apples used was 386g)

Sift the flour, or flour and baking powder, into a bowl, rub in the butter, add the caster sugar or light brown sugar. (I cheat at this stage and put the flour, butter, and sugar into a food processor and process to crumbs):

Peel and core the apples, cut the flesh into 2cm/ 3/4 inch dice. Blend the demerara sugar with the cinnamon (or ginger) and roll the apples in this mixture:

Chopped and coated in spices…

Add the flour mixture, mix, and then add the egg and milk:

Dry coated apples…… this is correct, although it seems odd, as the juice from the apples flows during baking. Spoon into the prepared tin, and top with the caster sugar and cinnamon (ginger): 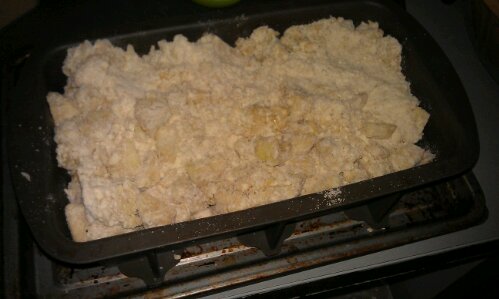 The cake turns out nice and moist, the pieces of Apple stay semi-intact giving texture and interest to the cake.

The ginger variation I use gives a tasty bit of fire to the cake. I love ginger with Apple, especially in juice. I wish Orchard Pig’s Ginger Pig was sold in more places.