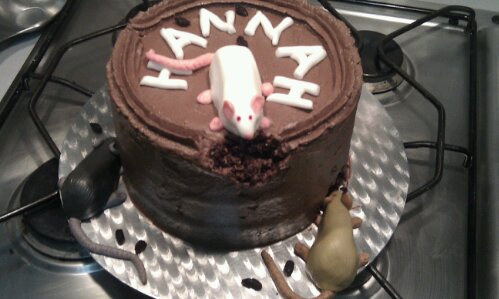 We’re off on holiday today, leaving our lovely friends looking after house and cats, and I’m going to be on this train for a wee while so I thought I would share something old….

It is well known amongst my co-workers that I love to bake, love to create, and most of all, love to make things for other people (other than the slight pressure of whether they will like it!)

My lovely co-worker Hannah turned 30, and particularly as she often misses out on all the tasty treats that everyone else brings in, our secretary wanted to make a special cake for her birthday, but didn’t know where to start….

As a vegetarian, I make a lot of vegetarian stuff, but also a lot of vegan things too, and try and include some whenever we have a bake sale. After all, I wouldn’t want anyone to have to miss out on donating!

One thing you might also need to know about Hannah is that she loves rats. She owns rats, has pictures of rats all over her locker, screensaver…..

So first off… I baked three layers of chocolate cake using the basic chocolate cupcake recipe from Vegan Cupcakes take over the World, extending the cooking time slightly to accommodate the increased size (timing will depend on size of tin/ depth of cake…. Etc).

Preheat the oven to 350F/180C and line muffin pan with paper or foil liners. (NB. for this cake I used 9 inch round cake tins, greased and lined)

Whisk together the soy milk and vinegar in a large bowl and leave aside for a few minutes to curdle.

Add the sugar, oil, and extracts, and beat until foamy.

In a separate bowl, sift together the remaining ingredients, then add in two batches to the wet ingredients and beat until no large lumps remain.

Pour into liners, filling three-quarters of the way. Bake 18 to 20 minutes, until a toothpick inserted into the centre comes out clean. (NB. for a cake this size, I extended the baking time to about 40 minutes) 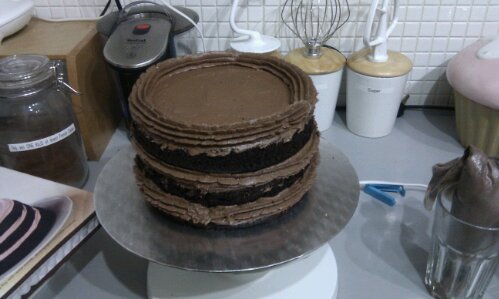 To decorate, my idea was to spell out her name in icing: 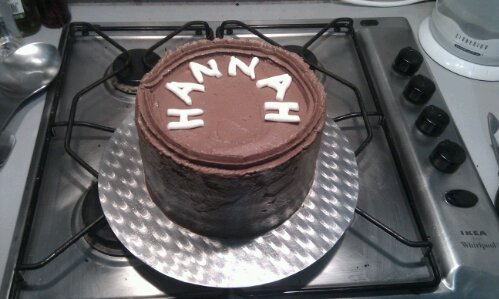 and make some rats: 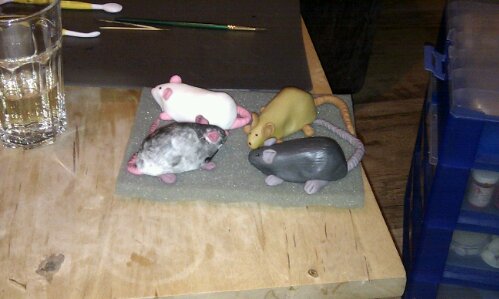 But if rats were left on a cake, do you think they would leave it alone? I suspect not. So with a fork (for rough nibbly edges) I took out some chunks of cake and frosting and then added the rats:

And if rats had eaten a load of cake…. Would they not leave little presents? Using the cake and frosting removed, I squished it together and formed little droppings…

Hannah liked it, everyone else enjoyed it too. A job well done. I was very pleased.