As previously stated…. I love fancy dress. I love wearing it, I love making it…..

But when notice is given for a theme on the Monday.. before I fly up to Edinburgh on the Friday….. Panicstations.com

My friend was sometimes known as Bee growing up (Debbie – Bee, you can see how it works), and the original plan for her hen do was for her to dress up as a bee and the mothers to wear Bee boppers. But then the plan changed last minute for everyone to dress up.

The challenge was on.

First, I went to the shops and looked about for inspiration. I found a set of bee wings/ bee boppers/ bee on a stick (yes, bee on a stick… I didn’t really get why that was necessary either) in Claire’s Accessories. First step done.

Next I adapted a plain black vest top with some yellow stripes. The yellow material was some cheap, synthetic… kinda nasty stuff that I bought for a previous costume, it also had no stretch, so when sewing it in strips onto a stretchy top…. it is going to result in a problem. To get around this, I pinned the strips to the top at each side while I was wearing it, then sewing them on to the top.

Then I made a yellow puffy skirt our of sheer yellow fabric. I measured my hips, then cut this double this value strips, and sewed these to a thick elastic strip also cut using the hip value. (note: if I made it again I would probably do triple value, as the skirt wasn’t that puffy :o( ). This I wore under a short black skirt that I already had.

I also made some furry black legwarmers (Edinburgh in April = somewhat chilly of an evening). I made these by measuring knee to bottom of my foot, then cutting the fabric and wrapping around my calf. I then pinned it where I wanted it to be (slightly flaring out towards the bottom). This was then sewed to some black elastic… and done!

I also revisited the Simplicity 2829 pattern that I modified for the Racing Pigeon costume. Along with the main costume, there is also a pattern for a hive shaped bag. The outfit so far hadn’t really lent itself to pockets… so I knew I was going to need something to keep things in.

Ta dah! Here it is in close up (you can also see my Apex hotel duck):

I think it really completed the outfit. 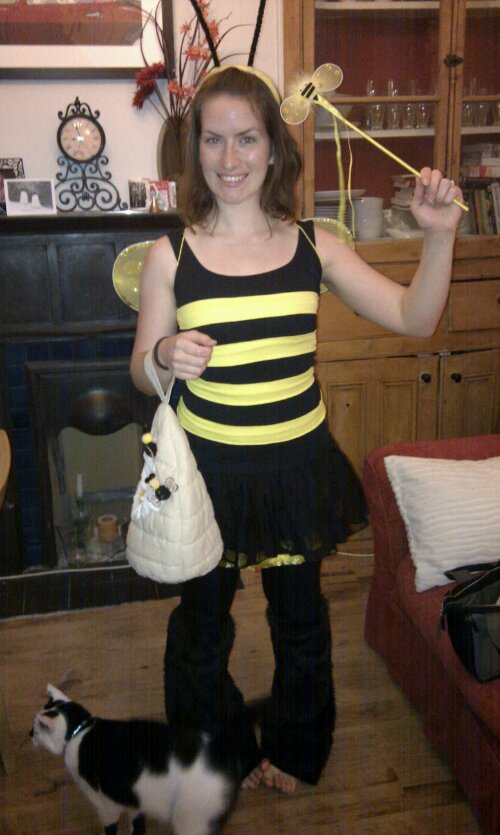