Crafty update: Hook Roll, Cross stitch and getting my sourdough mojo back

I have been busy I tell you!

Granted, the majority of these were done yesterday when I had the day off work, but I did two of the little ones tonight. I think I might be getting the hang of it! 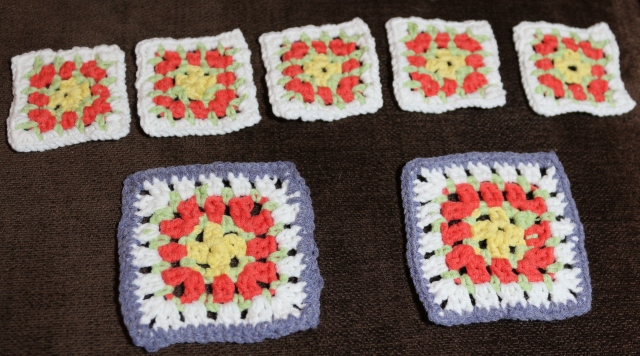 Here’s a close up of the large ones:

..are entirely made up of double crochet and chains.

Next strep is to join them together, the large ones form part of the main roll (the smaller ones join to make a strap, which then has a magnetic fastener attached), which then is made up of rows of crochet 32 stitches long, and formed by double crochet…. I may struggle to keep count…..

Mr M has been working away at his cross stitch, and I think he must have liked it as it is now complete! 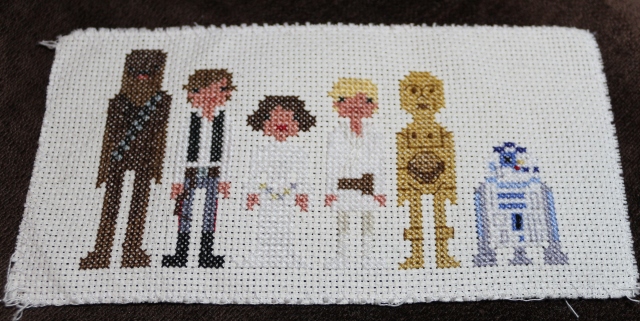 Now of course we just need to do something with it….. Note to self: while it seems like there will be enough contrast between the natural/cream aida and the white stitching… there isn’t.

Oh and a further benefit, not only of me having the day off yesterday but also being up at strange hours, was that I had the opportunity to do some sourdough bread making! I find it tricky sometimes to get the timing right for all the stages aof sourdough making, feeding, making and kneading, then proving the dough, around my regular working day. I usually try and feed it as soon as I wake up, then make the loaf when I get home from work, leaving it to prove overnight, then switching the oven on as soon as I wake up the next morning (it takes at least 20 minutes to come up to 230C) and baking it before work. As you may imagine…. it’s a little bit tricky sometimes, especially if I am going to my morning exercise class………. or working an early……

The problem then of course is that the starter culture gets neglected, even though I keep it in the fridge between uses, it really needs using fairly regularly to keep it happy, it was starting to be extra sour smelling, and the last loaf I made didn’t rise very well, and tasted quite strong. So now, a few days later, after it has been fed and split fairly recently, it was much much happier. Happy sourdough = lovely loaf: 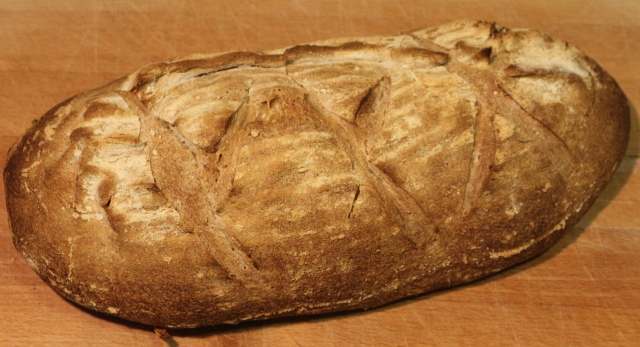 It was looking good!

I also made some more of the Cheese and Apple bread from this post, as the consequence of feeding and splitting in order to get the sourdough happier was that I had quite a lot of starter! It was lush. I took one into work today and between the 6 of us it was gone by lunchtime!