I was really really super duper excited about this post, but alas, I had to contain it, as it was a birthday present for my friend and I couldn’t post it until I had given it to her, just in case she saw it and it ruined the surprise! However, today we lunched and had a crafternoon, so it was finally time!

We both own the book Knitted Dinosaurs by Tina Barrett, she has made a few for other people, and I have made the Plesiosaur and the Pterodactyl, and I had a little brainwave a while back as to what I should make her…….

A brainwave I say? I’m sure you are probably thinking that I have told you lies, as  this is just a T.rex……

However, while I’m sure you’ll agree it’s pretty darn tootin’ exciting just as it is… I thought I could add a little something something to make it even more fabulous.

This was why I learnt to crochet (Yes! Way back in October! Showing just how long this idea has been floating around in my head!), as I thought crochet would probably work better for this than knitting.

First, and excuse my poor instructions as I just sort of made it up as I went along and have very limited crochet experience, I made a chain of 5 stitches, slip stitched them together into a round, then did double crochet all the way around. I then continued in rounds, with single or double chains between the double crochet stitches as the rounds got bigger in order to keep it flat, until I reached the size I wanted…

Next, I did another round, but instead of making it flat like the one above, I just did double crochet into the previous rounds, allowing the edges to curl up into the middle, then at the end I made a little chain of stitches and slip stitched this into the side…….: 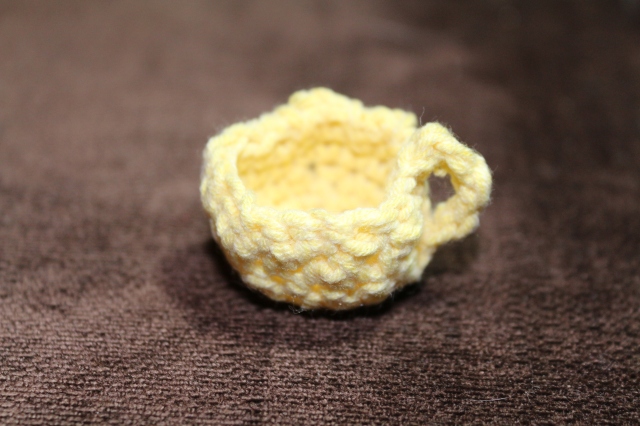 So, when added to the previous pieces, I’ve got a cup and saucer:

But what good is a cup without anything in it?

I made a circular piece of beige knitting using stocking stitch:

Then sewed a line of running stitches around the edge and drew it up and stuffed it:

Then put this into the cup: 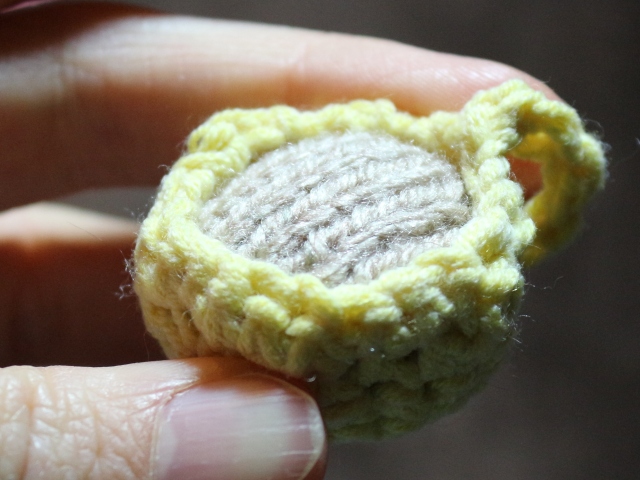 I then sewed a saucer in one hand, and the cup in the other:

Then he was complete! Rah! 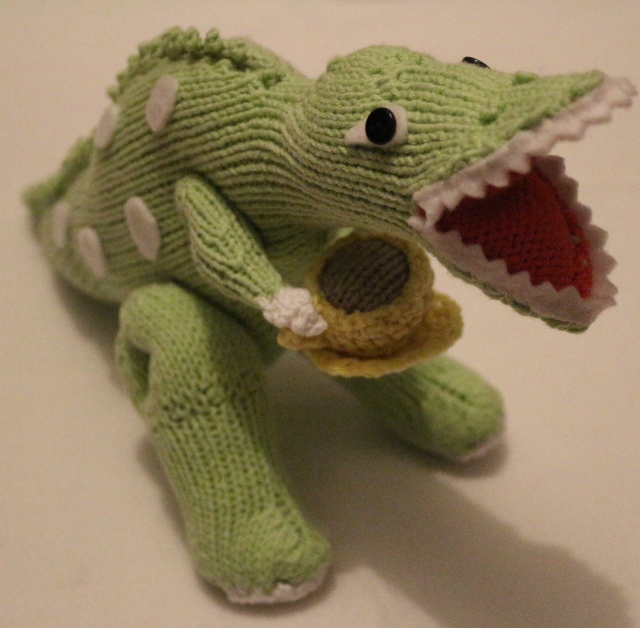 During the early stages, the dinosaur looked a little odd…. but once it was all sewn together it was looking much better, and once he had teeth and spots and eyes… he was looking good! With the addition of the cup and saucer… now you’ve got a handsome chap!

As for his name? Well, that would be a little nod to Mr. B, the Gentleman Rhymer, that chap-hop sensation, soundtrack to our 2011 ski trip to Les Arcs (thanks to Mr S)! I later debated on making him a little moustache so that he would be a true gentleman dinosaur… but I held myself back…

I do in fact really really love how it turned out!

I also made a little box for it to go in, using some card that I had lying around, and upcycling an old birthday card into a tag:

Leave a Reply to Clouds of Colour Cancel reply