Week 2, and it’s bread week! Surprisingly, yet again the technical challenge is something I would actually want to make!

You can find the recipe on the BBC website here.

I decided to do it all by hand and didn’t cheat by using my stand mixer to knead the dough, the dough progressed through phases of lumpy, sticky, snotty, then back to sticky, then was proved in a bowl. NB. I had to prove my dough for longer than an hour, for it to double in size, perhaps because I had all the doors and windows open and it was a bit chilly in the kitchen, in the end I think it was at least 2 hours.

You then roll it out and rest it, and cut out 9cm circles, prove again, then finish off by cooking them on a flat griddle (or big frying pan!)

….and here is the finished result!

So uniformly round! Haha! However, if I zoom out….

…you will see the somewhat irregular ones on the bottom row! The top five were cut out directly from the rested dough, the others from re-rolled dough, which is why they are a little less nice looking.

But the taste? Well, I cut one up and spread it warm from the griddle with a bit of butter: 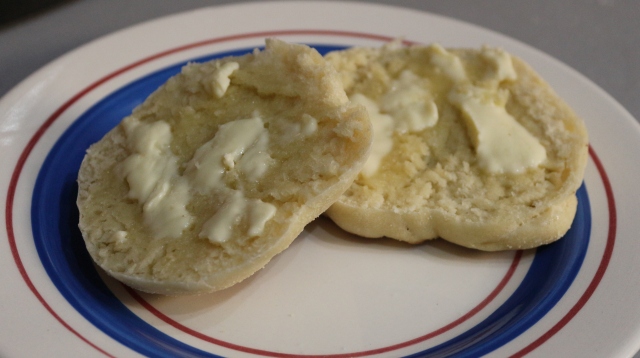 I was going to take these beauties into work today for my lovely co-workers and I to munch on, but… I was on call last night and didn’t end up at work today.

But I made the most of my day off and made another batch, and also a little variation of the recipe by adding 1 tsp of smoked paprika to the dough and kneading it through:

The smoked paprika adds a nice bit of flavour and heat to the taste, I reckon they will be nice toasted with a bit of cream cheese….Mmmmmmm

….and check out the second batch of regular ones: 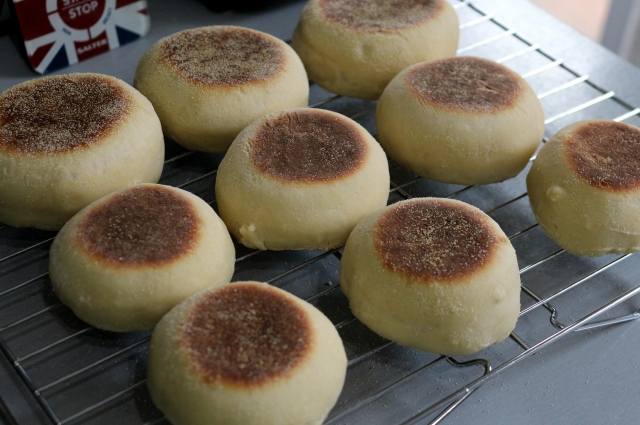 Cor blimey! Surely even Mr Hollywood would think that these were not too shabby! Although there are 9 of them…. not sure how that happened.

There is however much more uniformity in appearance, even in the re-rolls, possibly because I kneaded the offcuts gently together to recombine them, rolled (or actually I just sortof pressed the dough out) and allowed it to rest for a minute or so before cutting the remaining circles.

← An Indian Burrito: Chapati filled with curry and rice.
My Intelligent Owl Bookmark….. Oh and yeah…. We have some big news! →