This project originated way back in August, when my friend Rachael and I were sat in my old local pub in Bristol (Yey for The Old Stillage!), and she was telling me about these cool knot cushions she had seen while on holiday in Iceland, but couldn’t justify £150 for one cushion. being crafty ladies we were discussing whether we could make one ourselves, and about a week after I got back to Cali, she emailed me this link, detailing how one person had gone about it.

That was September the 5th.

Although I guess you could say the process had started, or set in motion way back in March last year, when Andrew’s parents came to visit, and brought us the ribber attachment for the knitting machine. Which had of course stayed wrapped up and unused until a couple of weeks after the above, when I decided to get it out and set it up, as a ribber is the ideal tool to help you knit an enormously long tube of knitting! 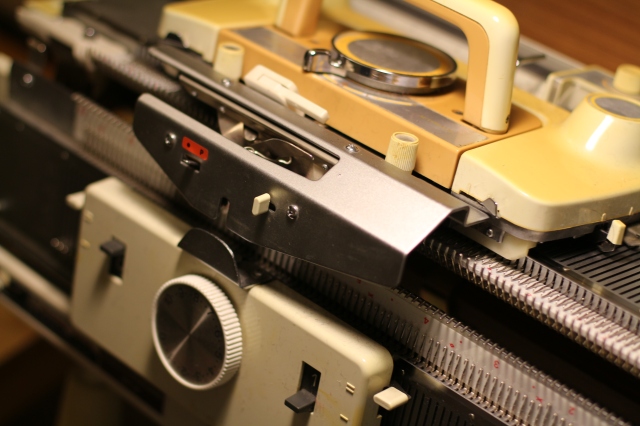 Yep. It looks all kinds of complicated. The first few attempts at tubular knitting were not all that successful. Kinda frustrating beyond belief in fact, and I was about ready to give up. Instead I spoke to Mother M, and she suggested that the crappy horrible wool I was using to practice with (because I didn’t care about wasting such awful scratchy stuff), was perhaps the problem, and I should try some different stuff. 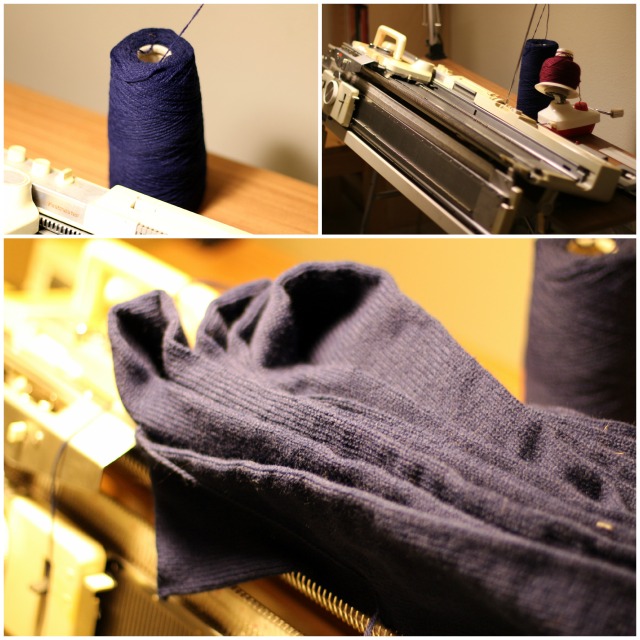 Yup! The other stuff was getting snarled up and caught every ten rows or so, so was just impossible to use, but I had this really big cone of navy wool from the 70s in amongst the other yarn donated to me along with the machine, and so I started off again with that just to test….. 1,000 rows later I was still going strong, then of course Mr M wanted a go…… (boys and toys) and 6,000 rows later it finally got caught and I couldn’t be bothered to try and fix it. At this point the tube was about 6m long, which was the length required anyway, so the knitting was complete!

It then sat around for another month or so, until I finally decided to take the next step and stuff it. For this I decided to truly make this a scrapbuster of a project, by taking my tube knitted using wool from the 70s, and stuffing it with filling made by supplementing my stuff with all those teeny tiny scraps of fabric that Mr M is always nagging me to throw away.

…then use to stuff your tube! 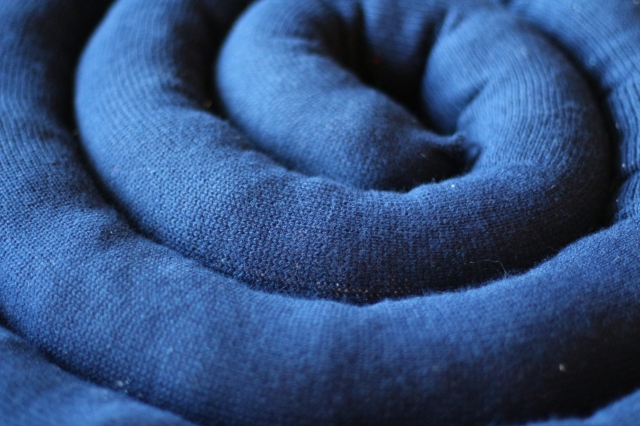 At this point it then sat around for a while………

Until I knotted it together (using the 4 bights turk’s head knot from this tutorial), left it sat around for a while longer, then finally completed it this morning while procrastinating from doing studying (and because I am heading to knitting meetup this afternoon after 6 months off as it is during the day while I am at work, and I thought it the ideal way to force me to get it finished and show people!)

It is not perfect by any means, it is kinda lumpy in parts, and the light stuffing shows through the navy blue knitting a little in places. But cunningly, and quite by accident, the colour matches our bedding quite nicely!

Cost: 1 bag of stuffing. Stashed yarn from the 70s. All those scrappy tiny bits of fabric that Mr M keeps nagging me to throw away.