Welsh cakes were a request this morning from my dear darling husband.

I had never made them before, but he had had some at Coffee #1 a couple of weeks ago and I think he was having flashback cravings.

I went to the dear old BBC Good Food website, and there we go, looked fairly simple, just a case of getting the right level of heat on the pan…. As a treat to myself, having just cleaned the house (very boring task indeed), I decided it was time for therapeutic baking….So here we go….

50g lard , cut into small pieces, plus extra for frying (or vegetable fat…. lard is ick)

splash of milk (if required)

Mix in the currants. Work the egg into the mixture until you have soft dough, adding a splash of milk if it seems a little dry – it should be the same consistency as shortcrust pastry.

Roll out the dough on a lightly floured work surface to the thickness of your little finger.

Cut out rounds using a 6cm cutter, re-rolling any trimmings.

Grease a flat griddle pan or heavy frying pan with lard, and place over a medium heat. Cook the Welsh cakes in batches, for about 3 mins each side, until golden brown, crisp and cooked through. 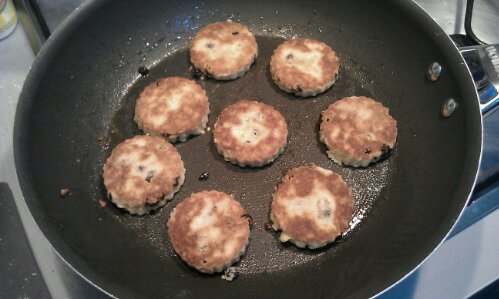 Cooked! Delicious served warm with butter and jam, or simply sprinkled with caster sugar. Cakes will stay fresh in a tin for 1 week.

So Welsh cakes were done…. then I decided to make a second batch, but mix up the ingredients a bit. I had a bag of dried Cranberries leftover from the ‘Great Cranberry stash of Fakesgiving 2011’, so I decided to use these as a starting point. But what else to put with them? Time to consult the bible. The Flavor Bible that is (yes, I know Flavour has a ‘u’ in it… but it’s American… what can you do? p.s. there is also a Flavour Thesaurus out there that seems to have pretty good reviews, but I don’t have it, I bought/ added the other one to my wishlist on recommendation from 101 Cookbooks)

Two things stood out for me, Ginger and Lemon, both things that I thought would work well… So I substituted the currants with 50g of dried cranberries, and the zest of 1 lemon, and the 1/2 tsp of mixed spice with 1/2 tsp of ground ginger (NB. probably better to use at least 1 tsp, see below).

So then both batches were sprinkled/ dunked in caster sugar, and put into a tin ready to take to work tomorrow!

The Cranberry, Lemon, and Ginger versions taste fruity and nice, but there isn’t enough ginger, so I would probably up the amount to at least 1 tsp next time.