A little dress for a little lady

When we had the Jubilee party, Saffy (of the mouse) the daughter of one of our friends, arrived wearing a super cute and very appropriate union flag patterned dress over leggings and a top. It was cute, and you could tell the crafters amongst us as our reaction was to try and figure out how it was made!

Later, while Saffy was being changed, we robbed her of the dress and traced it on some paper….. Now I finally had some time, I decided to tackle making another!

The dress is double sided, kindof dungaree style in a way, there is a front panel and then the two side/back panels cross over the back and attach to the front at the top/shoulders with buttons and buttonholes. What was nice about it too, is that while they are little it’s a dress, as they get bigger it can be used as a sort of tunic top, so it grows with them…. at least temporarily!

First step was to make templates for pattern pieces, then cut them out. So, I lay out the pieces and cut 1 front piece in each fabric, and 2 side/back pieces in each fabric.

Then, right sides together, I stitched the side/back pieces to the front at the side seams: 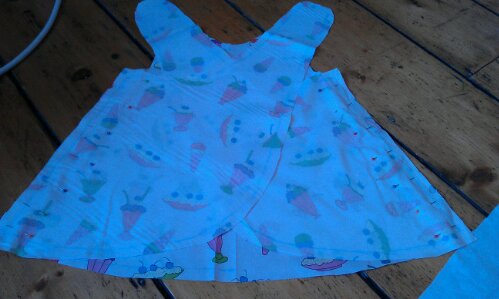 One of the fabrics I was using had icecream sundaes patterned on it, for the other side I chose to use plain white, but then add some pockets in the icecream pattern, so I drew some out, cut them out, then pressed a hem to the top and doubled stitched it for the top of the pocket. Then I pressed in the sides and bottom. 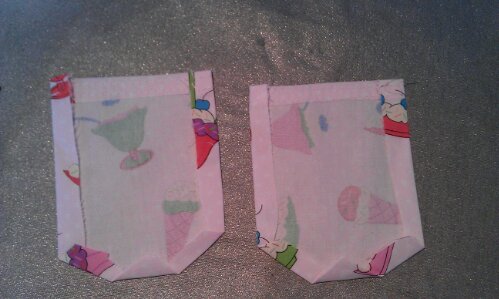 Then I placed on the front of the white piece…. 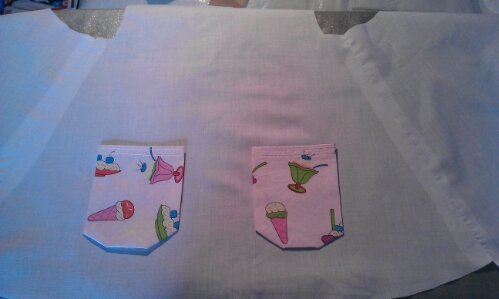 …and sewed them on. (I had to put a picture of this on, it’s far neater than my usual standard – I think the workshop with Ros has shamed me, I even ironed the fabric and ironed the turnings and everything!)

I press the side seams flat, then assembled the two sides, with right sides together… 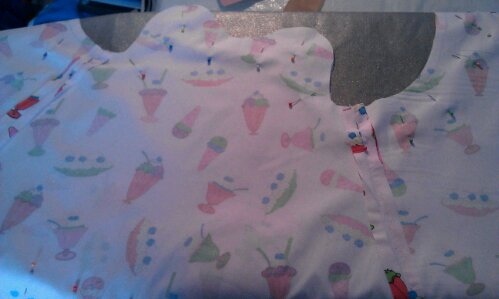 Then I sewed all the way around, except for a gap on one of the back seams to allow for turning.

Then I trimmed the seams, and turned it inside out.

I pressed the seams, including the opening, then oversewed the edges all the way around.

I made some buttonholes at the top of each strap….. (which involved learning how to do buttonholes on my machine! As it turns out, it wasn’t that hard!)

Next I sewed on some buttons, double sided so that each side could be used, and for a little bit of decoration!

…and then if it’s flipped over….