Earlier this week I saw a link to this recipe on Facebook.

I had, a long while ago, contemplated to myself about making a dessert pizza, but never taken the plunge. Time was ripe…. and no better time in fact, than Friday evening after a long week at work, to indulge yourself in some chocolate heaven.

The original recipe comes from the new Gü Chocolate Cookbook, but was published online by Stylist Magazine.
I used the basic recipe stated in the article for the base, made the dough and kneaded for a few minutes until smooth:

Left it to rise for an hour or so until doubled in size… then punched down and rolled out to a circle.

I had made some ganache, using 50g plain chocolate, finely chopped, added to 50ml of hot double cream. Allow to melt in the cream for a minute or so, then stir to mix together. Allow to cool to a piping consistency, then pipe a ring of ganache a couple of cm from the edge: 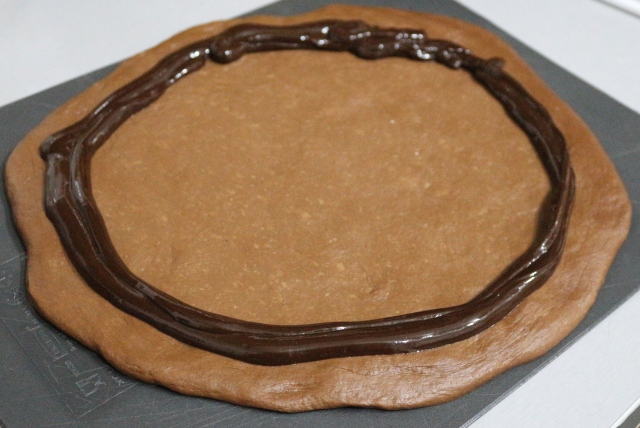 Moisten the edge slightly, then fold over the top of the ganache and press into the centre:

Transfer to a baking tray that has been warming in the oven while preheating, and brush the centre with melted butter. Prick the base with a fork. Bake for 10-15 minutes.

While that was baking I had finely chopped 40g milk chocolate, and 20g each of white and dark chocolate:

And also made some salted caramel sauce: heat 100g caster sugar until dissolved, then cook until a golden brown, add half of 100ml of double cream and whisk to mix, then add the remaining double cream and stir until combined. Add 1/4 tsp of sea salt and stir through, and you end up with this little pot of delight….

Sprinkle the chocolate, and drizzle the caramel over the base of the pizza, then return to the oven for a minute to melt slightly….and it’s done! 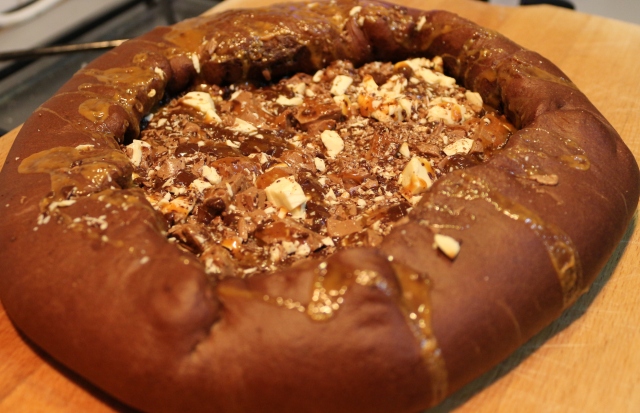 I sliced it into eighths…. I figured it might be a little sickly with all that chocolate…

Can I just say… it was super yummy, but quite sickly. I could eat no more than, you know, a few slices at a time 😉

Note: I made this again the next night, as we had eaten it all and Brother M was coming to stay and wanted some, and it seemed like it was be nice to husbands day, so I made mocha ganache instead of regular chocolate, by adding ground coffee to the heated cream (I hate coffee). I also toasted some flaked almonds and added those to the top.