As a little treat to myself while I was in Hobbycraft the other week (with a 25% off voucher….. Thank you very much!) I bought a crochet kit to occupy my time on the flight over here.

……..a strange sort of yarn, that isn’t in fact a traditional yarn at all, but made of narrow strips of a jersey type material.

The thickness of the yarn means the kit uses a 12mm, and in this case made of bamboo, crochet hook, so it’s very airplane friendly. I’m not sure even the most overenthusiastic security would consider it an offensive weapon! (My 4.5mm metal double pointed knitting needles on the other hand that I also brought with me were alas confined to my checked case!)

I did the majority of the main part of the bag on the flight over, then……lost the instructions. Doh. Thankfully a found a .pdf online here, so all was ok!

The main part is worked using double crochet, but through the back loops only, which gives this ridged effect:

You then fold it over and crochet together along the edges, and then a few rows of single crochet along the top:

Then all that was left was to sew the handles on… Although with yarn like this….. It isn’t really sewing as such, more feeding it through while poking holes with your fingers!

Verdict? I quite like the feel of the Zpagetti, but it ends up quite weighty and bulky, and if you’re a novice crochet-er, like me, you have to be careful as any errors or lumps are magnified! The instructions were a bit unclear also I thought, or at least that’s my excuse for why I had to redo the main part about 4 times……

…..and a (poor quality due to having to use my phone camera) action shot: 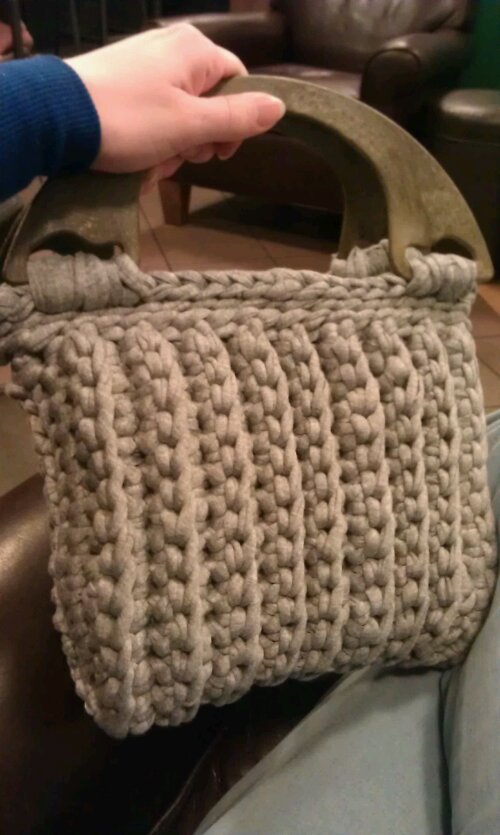 I’m liking it a bit better now, think I need to create some sort of little embellishment though, so that’s the next job on the list!

P.s. I am too much of a cheapskate to pay $15 for WiFi in our room so have limited internets. Thankfully the very delightful and delicious Snooze has free WiFi to go with it’s amazingly tasty breakfast, and there is always that well known Seattle based coffee chain!

I’ll leave you with this picture:

Wish you were here?