It has been a busy weekend!

I drove up to Manchester after work on Friday night to meet up with my Mum. I had bought us tickets to the Cake and Bake Show in Manchester on Saturday, having quite enjoyed ourselves at the one in London in September. It featured a life sized gingerbread house from Juliet Sear:

….and of course the attendance of many of the old GBBO contestants (p.s. the new series started being filmed on saturday too!): 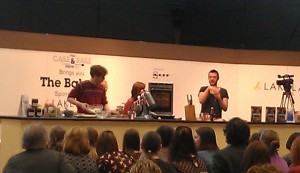 The stand out demonstration that I watched was once again from Patrick Ryan of the Firehouse Bakery and Bread School.He is really passionate about baking, and demonstrates really well, explaining in very simple, straightforward, and easy to understand terms, exactly what he is doing. Plus, he made not one, two, or even three things, but four things, all with the same simple brioche dough. (If you’re interested, they were a pulled pork pie with brioche ‘pastry’, Rhubarb and Custard swirls, buns with salted caramel ganache inside, and some posh ‘french toast’ with day old brioche – I tried all except the pie, deeeelish!)

This little experimentation was however inspired by a demonstration by Dean Brettschneider (and I guess by the Pesto Twists I often get from the friday food market). One of the things he made was a savoury version of this scone twist recipe, available on his website. I decided to try a bit of a savoury twist, but with bread dough (taken from this book), so I could try out my new bowl cover!

It’s a good one for using up whatever you have in the fridge, feel free to substitute all over the place!

Put the two flours in a bowl with the salt and yeast, mix together to combine. Add the oil and water and mix to a rough dough, then tip out onto a work surface and knead for 5-10 minutes, until smooth and elastic.

Trickle a little oil into a bowl, add the dough and turn in the oil until coated. Cover the bowl and leave to rise for 2 hours, or until doubled in size.

When the dough is well risen and puffy, knock it back to the original size.

Meanwhile, assemble the filling by combining all of the ingredients in a bowl.

Split the dough into two, and roll each out into a rough rectangle about 1cm thick, and spread the filling over the surface.

Roll up the rectangle (much like a swiss roll), and pinch the ends together:

Leaving a 1 inch gap at one end, cut along the length of the roll, exposing the layers:

Twist the two halves together and pinch back together at the base.

Preheat the oven to 200C, and allow the twist to prove while it heats up.

(not the most glamorous looking twist in the world…….)

But I can attest to it being tasty!

While that was proving and baking, I tried my hand at a little simple patchwork (2inch by 2inch squares):

……………….ready for something else from my many pins in my Things I would like to make (Crafts) board!