…or you may know it simply as an “and” sign.

We bought some papier mache letters from a craft store a few weeks ago, and after having them for a couple of weeks and doing nothing with them, finally I got some paper, paint, mod podge (matt), and some tools and got on with it!

I gave them a base coat of dark grey paint so that any exposed bits would blend in a little better, then traced around each letter (front, back, and all the sides) onto the reverse of the paper and cut them out. I then used the mod podge to apply the paper to the letters, and applied another coat on top to seal them in.

I thought they looked pretty good, but I wanted to link them with each other with something different, so enlisted the assistance of Mr M in a little DIY craft project, as I had an idea of what I wanted to do, but didn’t quite know how to bring it together.

I printed off a simple ampersand, then used that as the basis for the outline of the shape I wanted to make by smoothing out the lines into something slightly easier to make (although, in retrospect I should’ve made it even easier…… but clearly wanted to make it more difficult for myself!) I got some regular wire, flux, and solder from the hardware store, and used the wire to form the different shapes of the character.

So, the wire was formed into the shape of the outside lines, and both the inner shapes. I made two lots of each, one for the front and one for the back, and cut lots of little pieces, so that I could join them together and make it a little more three dimensional.

The next step was to join each of the pieces together with solder, closing the gaps in the main pieces, and then linking them all togther, front to back with the short pieces and the inner shapes to the outer main shape with some more short pieces of wire:

Not the prettiest of joins, but for an experiment (as Mr M was convinced it wasn’t going to work), and pretty much my first time soldering, it isn’t too bad!…… Mr M’s joins are better than mine, but we won’t tell him that – Shhhhh!

But look! It stands up and everything! 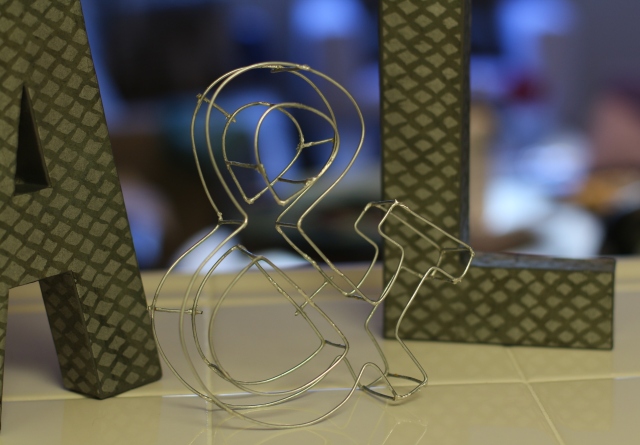 All in all I’m pretty pleased with it, and it makes the place look a little less like some holiday rental we happen to be staying in! A nice little weekend husband-wife DIY project!

We also spent the weekend on constructing and putting up what currently amounts to the grand total of our Christmas decorations (as the rest are in a container, along with the rest of our stuff, that today is going through the Panama canal – they’re getting closer!)

Yep, a Winter Wonderland of LEGO and a beautiful bauble-y wreath. I didn’t make the wreath, just bought it on a whim in Jo Ann’s a couple of weeks after spending all day being bored in car showrooms. #IloveitandI’mnotevenslightlyashamed