I can’t help it. I don’t trust this oven much with anything else, although I may have to bite the bullet and make my Christmas cake as time is really ticking away now! I was sort of hoping to wait until we move, as the new place has an electric oven, which is bound to be better than this one right? #thisiswhatI’mtellingmyselfsojustagreeok?

That, and anything crafty is pretty much a WIP around here. One of them is not entirely my fault, I forgot that as I had used a little bit of my skein for another project, so probably wouldn’t have enough to finally finish the WIP that has been in the works for…. at least a year. My Weasley jumper is in progress, although I think I have messed up one of the sleeve so am going to have to pull it apart and start again #sigh. My cross stitch is also in progress, but is much more fiddly than it first appears as it has 4 different greens making up the foliage…… Gotta look real carefully at that pattern! I am also practicing a bit of crochet by making a simple dishcloth, want to perfect my technique a little more!  ……..and I have started something else too. Yep. I know. I should finish what I’m doing first!

Anyhow…. back to the bread.

Combine the flour, yeast, sugar, salt and cinnamon in a bowl. Add the oil and water and combine to make a dough.

Knead by hand for 10 minutes, or machine for 6 minutes, until the dough is smooth. Place the dough in a bowl, cover, and leave to rise until doubled in size, about an hour.

Knock back the dough, then knead the raisins and chocolate chips into the dough so that they are evenly dispersed. Shape into a loaf and place on a greased baking tray and leave to prove until 1 1/2 times size, about 30 minutes.

When risen, place the loaf in the oven, and reduce the temperature to 200C/400F, and bake for 30 minutes, or until golden brown and sounding hollow when tapped underneath.

Remove from the oven and leave to cool on a wire rack.

Yummy, and with the delicious light aroma of cinnamon floating through the apartment, which is of course vastly better than the abominable stench of cinnamon that wafts around all the craft stores at this time of year…… Those pesky cinnamon pine cones! Mine eyes!

I had some for breakfast this morning, it’s so delicious by itself you don’t even need anything with it, but toasting it adds a little something I think. Sort of like a cross between cinnamon and raisin bagels, and the yummy chocolate and raisin sourdough we got from Boudin in SF at the weekend. #pleasecontainershiphurryupsoIcanhavemystuffback 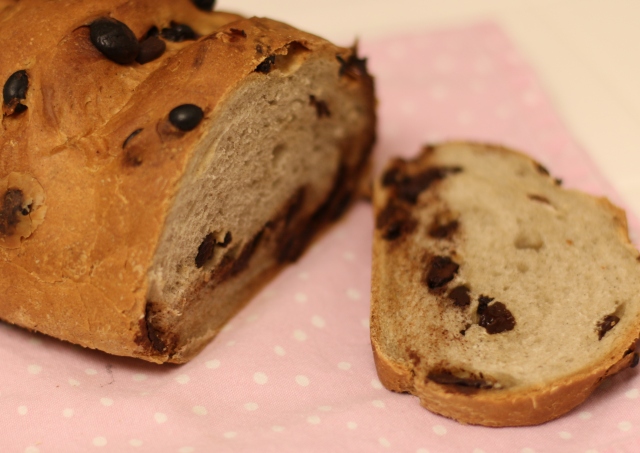