Christmas Cake and a Cozy Hat – another finished WIP.

I went for a hike last week, and the weather had turned “California Cold”.

I didn’t even own any gloves. Let alone a hat. For the most part of the hike, I didn’t even need my coat. Hiking uphill will do that to you. But once we got to the top? Man it was chilly! We stopped for lunch for a few minutes, and EVERY LAYER went on! They don’t call it Windy Hill for nothing. However, the only thing I had to go around my head, was a WIP that I hadn’t finished yet as I had ran out of wool and it is still kept away from me in the container (but the ship has docked at Oakland now people! It’s so close!), so I bound it off with some scrap yarn, just so I had something to go round my ears if need be.

Later that day, I went to Michael’s for the turquoise yarn for my shark fins, and saw some Loops and Threads Cozy Wool. It was soft and thick and snuggly, and on the reverse of the yarn band was a pattern for a hat! I also loved the colour, and bought a skein in Spearmint.

First on the queue was the wristwarmers, ready for the game on Tuesday, but once they were out of the way it was hat time!

Cute yeah? My first experience of cabling too, and I think it came out pretty well! You can get the pattern for free on the reverse of the yarn band, but it isn’t available free online. Party Poopers. 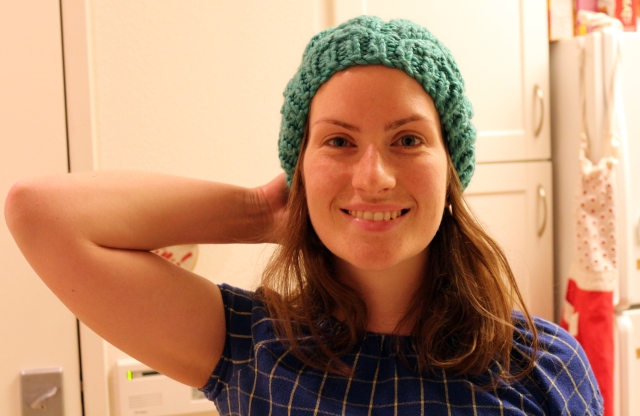 If I made another…. which I may well do as it is super cute, I would probable repeat the cable pattern another time, as I prefer to be able to pull my hats down right over my ears, this sort of sits on them, but not that low down. I guess by doing so though, I may find there is not quite enough yarn – this pattern uses just one skein.

I also finally made a Christmas cake, I was reluctant to do so in this oven as… it’s totally useless, but figured it was about time and couldn’t put it off much longer. This recipe came out of a Weekend magazine quite a few years ago, and I have used it ever since. It is a lighter cake than most Christmas cakes, which I like, and also doesn’t have any alcohol in it, or require soaking of the fruit, so if you avoid alcohol for religious or personal preference, this could be the cake for you.

Christmas Cake Recipe – taken from the Daily Mail’s Weekend Magazine….. some time ago.

(note: you don’t have to use these exact amounts of each of the above, I usually swap out the nuts for more raisins as I don’t really like nuts)

1 tsp vanilla or almond essence (most years I use vanilla, but this year used almond instead, and it added a little something extra I think)

Halve, rinse, and dry the cherries and place in large bowl with the rest of the fruit and nuts, flour, spices, and grated rind.

Add in the rest of the ingredients, and mix to combine, then spread into the tin and smooth.

Place in the centre of the oven and bake for 30 minutes, then reduce the temperature to 140C/280F and continue to cook for 4 hours until golden and firm to the touch.

Leave to cool fully in the tin, the turn out.

You can, at this stage, now leave the cake to mature for up to 4 months.

….. or, if you have left it until last minute like I… skip right to a bit of simple decoration.

Unlike last year, I have no equipment whatsoever other than a rolling pin, a pastry brush and some dough scrapers. No colours. No nothing. So I kept it real simple.

Layer of apricot jam. Layer of marzipan. Layer of fondant. Bit of icing “piped” on in a freestyle snowflake shape using a ziploc bag with the corner snipped off. Dusting of sugar.

That’s as good as it is going to get!