These little beauties I actually made on Wednesday night while watching GBBO (such amazing showstoppers this year!), but by the time they came out of the oven it was late, and so today I finally catch up with myself!

100g chocolate chips or grated chocolate – NB I was using some quite large chocolate chips, so chopped mine along with my raisins so that there were in much smaller pieces and wouldn’t get in the way as much while rolling/cutting out.

Cream the butter and sugar. Beat the egg yolk with the vanilla extract, and slowly add to the mixture, stirring until well combined.

Add the flour and cornflour and mix until a dough starts to form, then finally add the chocolate chips and currants, stirring to incorporate evenly, or bring together with your hands and knead gently.

Split the dough in half, shape into a flat disc shape, and wrap in cling film and chill for about 30 minutes.

Place each disc of chilled dough between two large sheets of cling film, and roll out as thin as the chocolate chips/ currants will allow. Peel off the top sheet, as use a cutter to stamp out lots of shapes – NB The recommended size is 2cm….. ain’t nobody got time for that! I used a 4cm round cutter and still ended up with oodles of lovely biccies, but it is entirely up to you! Dip the cutter into flour every few stampings, then it will help prevent sticking.

Lift the shapes off the cling film, and place on the prepared trays, spacing at least 3cm apart – NB. more for ease really, they don’t spread a lot at all.

Bake for 10 minutes, or until lightly golden, allow to firm up slightly on the trays, then place on a wire rack to cool. 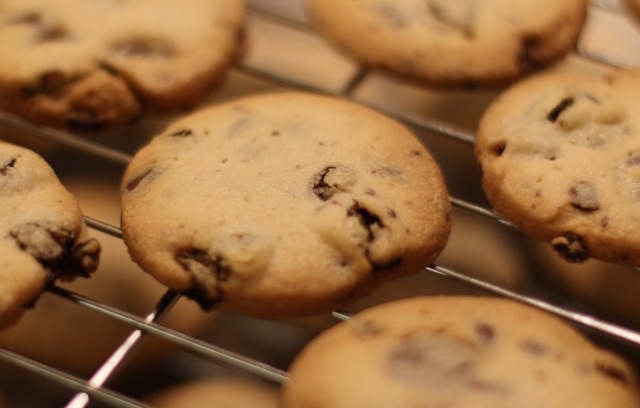 The great thing about this recipe is that it makes A LOT of biscuits, enough for me to take a box into work to share in our morning meeting, and for Mr M to do the same! Both lots went down a treat!

The texture is great, somewhat more of a crumbly shortbread style than a cookie, but it did mean they failed to remain intact while strapped to the back of my bicycle as I cycled to work. I mainly blame the massive potholes on my way from the station! But I envision an infinite array of variations by altering the additions!

I really love this recipe book, such a wide variety of both classic and unusual biscuits, so if you are a biscuit fan (especially living in a country that disappoints you daily with poor biscuit selection) I suggest you buy it 😉

More baking goings on lately, I think it was last weekend, was the baking a a variant of these cookies, but made with coconut, and coconut sugar…. then combined with some chocolate coconut icecream to make Chocolatey Coconutty Ice Cream Sandwiches!

Yum! As you can kinda see above, the coconut sugar caused them to be much browner than usual, so I kept a careful watchful eye on the baking to ensure they didn’t get overbaked!