My Own Personal Jane Austen Hero.

So…. Finally all the i’s have been dotted, t’s have been crossed, exams passed, graduation attended….

……and your girl here is now qualified to practice as a Clinical Laboratory Scientist in California!

Studying for all those tests and exams has left little time for hobbies, but I did make an exception for one project, essential for our trip home to the UK once I had graduated.

3 years ago, just before we made the move to California, my friends and I took part in the Jane Austen Festival Promenade  in Bath. We decided we would do it again, but this time Mr M was going to join us. He of course had no outfit, so I had to get that sorted!

(Note: we didn’t take a proper camera with us… it wouldn’t have really gone with the outfits, so prepare yourself for some poor quality phone pictures) 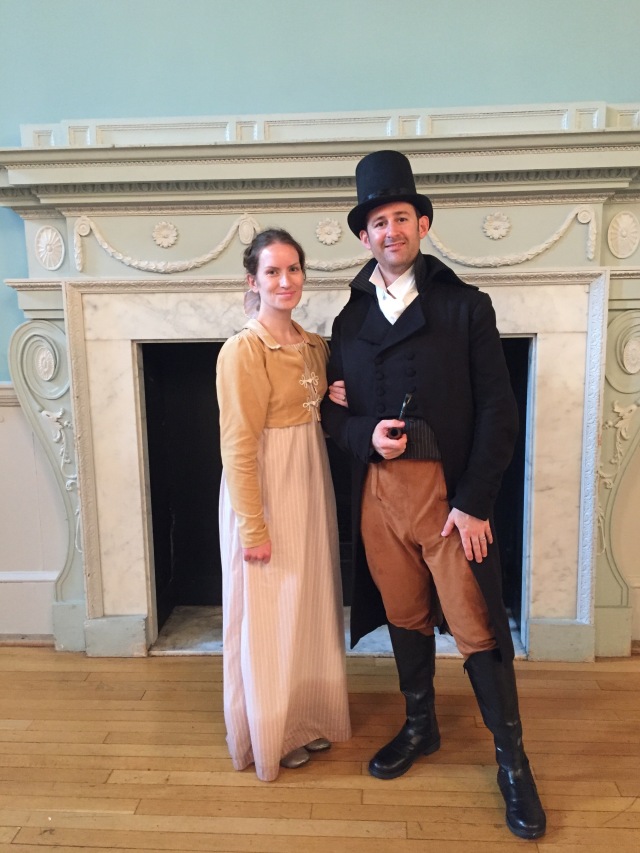 The above picture was post promenade, hence my dress being very soggy at the hem! 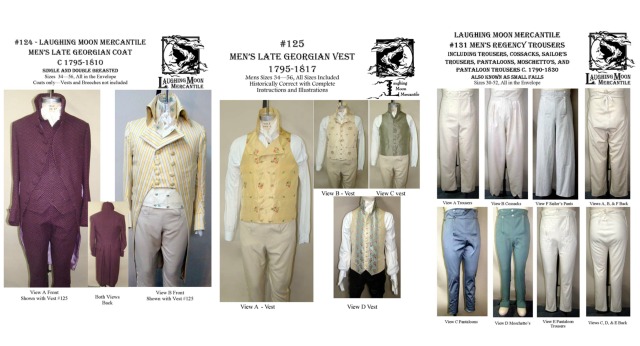 #124 was made in this wool blend fabric, which was possibly a little heavier than necessary, but sewed and pressed soooo wonderfully that I would recommend it regardless. I used self-covered buttons, and some kind of awful synthetic lining fabric (it did the job but… I didn’t like it).

#125 was made in something similar to this, but a different colour. Self covered button again, and my first ever attempt at welt pockets…. they didn’t go well. I am not really satisfied with this at all, but thankfully on the day you could barely see it once the jacket was on! If I had had more time I probably would have started all over again.

#131 was made in this really bizarre stretch suede-like finish fabric like this one, except in tan. Sewed great on my machine, by hand it was awful and gave me a blister!

For the shirt we cheated and used a modern shirt – no one was going to see it anyway, and accessorized/covered up the neck using a simple cravat constructed pretty much according to the dimensions in this post. You can see it a little better in this picture, he took his jacket off while we were eating some breakfast pre-promenade… A scandal! 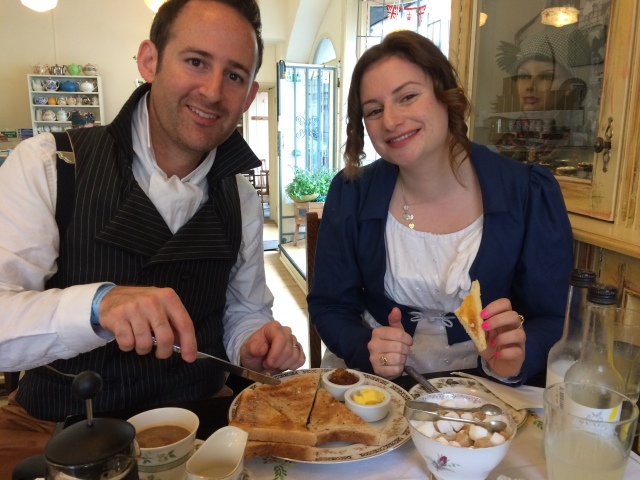 (He also had braces on under the waistcoat to hold his breeches up, they ended up a little roomy around the waistline, but I didn’t want to adjust it too much and ruin the line of the falls.

Boots were these ones, and the hat I got at Party City.

You can find all the official photos taken of the Promenade here, including one candid shot of Mr M and I while I am not looking!

The day itself was a little… damp. Hence the non-regency appropriate umbrellas featured in a lot of the photos, and so we didn’t take a lot of photos.

He really suits the dapper Regency look! But I feel like his outfit now makes mine look a little shabby….. Guess I will have to make a new one!