I could be going to see Jon Richardson tonight. Instead, as I couldn’t swap off work, I am watching old episodes of Doctor Who and writing this.

I had the inspiration for making these when I finally tidied up my bits and pieces from my trip to London with my Mum, and found my free gifts:

So I thought I should probably use them. I first made a variation of these cakes with some raspberry buttercream on sunday… they weren’t as good as I wanted them to be (come summer, or actually possibly if I get some of the berries out of the freezer, I might make some sort of berry compote and make them again), and also, the easy melt chocolate stuff was really weird. I won’t be buying it. But it did inspire this creation… so not all bad!

Originally I was going to call them something like Chocolate Dipped and Caramel filled Chocolate Cupcakes, but in the end I called them “Rolo” Cupcakes, as when I cut them open that is what they reminded me of. (Rather than those other ones, where a Rolo is pressed into the mixture before baking.) It has a slightly better ring to it don’t you think?

No Rolos were harmed in the making of these cupcakes.

Do you think you would love anyone enough to give them your last one? 😉

Cream together the butter and sugar until light and fluffy.

Add the eggs, one at a time and mix to combine.

Add the flour and cocoa powder and mix until combined.

Spoon into the prepared muffin tin. (I used my shiny new scoop, 1 scoop per cake)

Bake for 20-25 minutes in the preheated oven, until a skewer inserted into the cakes comes out clean. Then remove from the tins on to wire cooling racks.

You will have some nice domed cakes.

While the cakes are cooling, make the caramel. Put the sugar in a pan over a medium heat and heat until the sugar starts to dissolve, shaking at intervals to mix. Once all the sugar has melted, and the contents of the pan have turned a nice golden colour, add half the cream and whisk furiously to combine, once this is done, add the remainder of the cream and whisk again until it is all combined. Decant from the pan into a heatproof bowl and allow to cool to room temperature.

Next, cut cones of cake out of each of the cooled cakes, by inserting a sharp knife at an angle into the cake:

Cut the bottom off each cone:

…then place back on to the top of the cake so that you know which one goes with which cake!:

Fill the cakes with caramel: 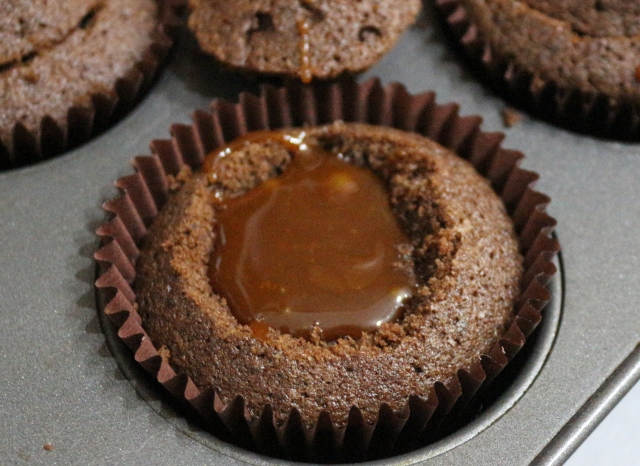 ……and then replace the top: 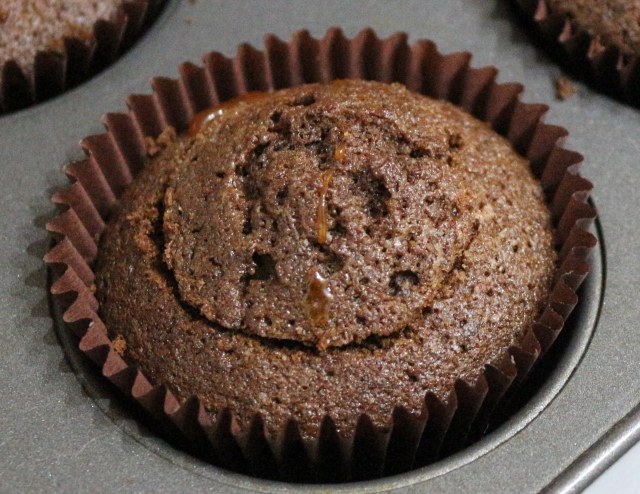 Then, all that remains is to melt the chocolate and pour over the top, smoothing over the surface of the cake, and allow to set: 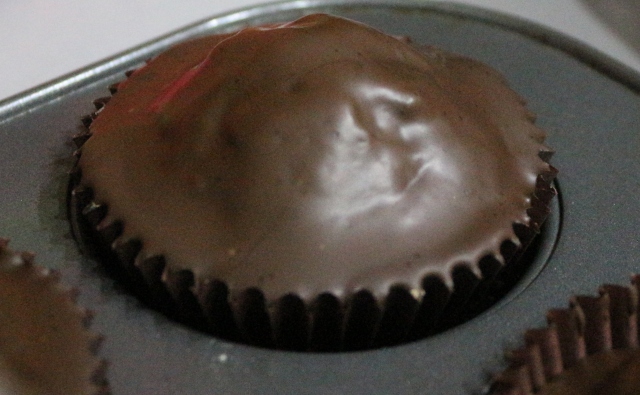 I sliced one open so that you could see inside:

They were tasty and delicious!

Note: as it was the last day of Movember today, I also made some Munchtaches to take into work:

The boys did some good work, here I am trying to fit in with a biscuity ‘stache with a couple of our Movember boys:

Also, to all those who love Homemade Hobnobs as much as me (well…. possibly not quite as much as me… but somewhere close), there is a celebratory day! And it’s happening again in January! Find details here.